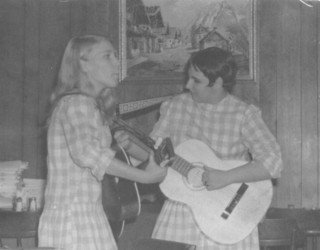 I was a folkie. If my hands didn't shake I might have performed & consequently written songs. On the right is the late Vicky Mroczek, who taught me how to write, among other things.

Dorcester Banner, where Paul Clipper, my baby brother, whose picture appears above, serves as editor.

Published by Bridge Works Publishing in 1996

Published by Picador USA in 1997

Published by Silicon Press in 2003

A genial account of how people's lives cross and combine to create cultures: one of the best multicultural sagas to come along in a long while.

I’m one of those writers who missed the endorsement of the youth culture. I started writing fiction seriously in 1981, not long after I shoved my doctoral dissertation under the window of the graduate division at the University of California at Berkeley. By that time I was already thirty. I had written a few songs and fewer poems, and when I was a freshman I told my roommates at Indiana University that I wanted to write a book about the loss of their virginity, which was quite hilarious. (Forty-some years into the future, believe me, I have a far better story. Life gives you your subject matter, and the great writers I studied for the most part got better with age.)

I told my brother I wanted to write a story about two intriguing sisters I’d met at a seaside resort where I worked as a waitress between undergraduate and graduate school. He is a writer himself, former owner of Trail Rider magazine and currently an editor of the Dorcester Banner in Cambridge, MD. He said, “Do it. Send it to me. If it’s any good I’ll tell you.”

Well, it wasn’t. For a long time after that. In the meantime, I got the day job I had studied for. Since 1985 I have taught full-time at Rider University in Lawrenceville, New Jersey. Now, as a full professor and former chair of the Department of English, I teach fiction and poetry writing, introduction to creative writing, expository writing, and literature.

My first story accepted by an international literary magazine was a piece about two kids who cut school and hijack a tomato truck (“Cow Tipping in the Land of the Truck Farms”) in The Literary Review, winter 1988. Mademoiselle published “The Bride Wore Red” before “Cow Tipping” came out, the title story (thanks to editor Eileen Schnurr, who wrote that headline) of my first book. I had several other stories published before my book was even accepted for publication, one of them, “Grace,” in Atlantic Monthly. Bridge Works Publishing, a small press in Bridgehampton, Long Island, published The Bride Wore Red and Picador USA brought it out in paperback. Barbara Phillips at Bridge Works helped me link the stories I had written separately. She showed me how to write a novel in stories. This is a genre I admire in Isaac Babel’s Red Army and Odessa Stories. Mikhail Lermontov’s A Hero of Our Times is one of Russia’s first novels.

My mentors are academics, teachers and readers, not fiction writers. My models are the Russians. Chekhov, Dostoevsky, Pushkin. So if you have trouble with the names—Surinder, Darji, one of my readers had a problem with Sally—I come by that honestly.

Red, as I call my first novel, got very good reviews from Kirkus, Publisher’s Weekly, The Washington Post, Philadelphia Inquirer, Denver Post, New York Newsday, and India Abroad, among others. It was a Barnes and Noble Discover Great New Writers choice, and the Pushcart listed the title story as one of its notables for the year.

Hard as it was to get that first book published, and I had to do it myself, despite the endorsement and advice of an agent, it is far more difficult to place a second novel—unless the first turned a handsome profit. Though more editors were willing to read my second novel, eventually I had to sell that one myself as well. Silicon Press persuaded me to place it with them. They were known as a technical press and had been talking to me for years about breaking into fiction and trade nonfiction. I worked very closely with Narain Gehani at the press (www.silicon-press.com) and C. J. S. Wallia of India Star magazine (www.indiastar.com) on the production of Fifty-Fifty.

It got a stellar Kirkus review, but as one of the editors who profiled me in 1996 put it, my first book was news. A second book has to compete with all those first novels that come across an editor’s desk, not to mention publications by best selling authors and established literati--in short, news.

I write poetry now. I also write fiction. My current project is a cycle of stories that update classic novels, stories, and plays. I'm keen on adaptation and have recently adapted Samual Richardson's 9-volume novel into a 5-act play. I'm working on adapting that play into a libretto.

Fifty-Fifty
This is my most recently published novel.
The Bride Wore Red
Tales of a Cross-Cultural Family. This is my first published novel. It made me a Barnes and Noble Great New Writer for the summer, 1996.
Dry Land Sailors
This is a novel about a group of high school graduates, between high school and college in 1969, who call up the dead and deal with the consequences.
The Music of the Spheres
This is a novel about Patricia Paula Sikorski who becomes St. Cecilia of a very prolific rock and roll group, The Spheres in the seventies, eighties, and nineties.

My day job
Authors Guild
Poets and Writers
The Association of Writing Programs
Email me.
Loading…}